They call it a ‘slave wall’ but I do not know the exact meaning. Is it a wall build by slaves or a wall to keep the slaves in? Or both?

A winery nearby, situated on an estate with the remains of century (centuries?) old buildings decided to do something about the entrance. Plenty of limestone rocks around and with the heritage in mind what better idea is there than build a ‘slave wall’?

Hard work for the own staff and a contractor but the end result is getting shape. In contrast with the days of old they now had  the assistance of machinery (digger loader) to transport the rocks but still manual work was needed to put the heavy rocks in the right place. The wall on the right side of the entrance is nicely in-line with with the natural rockery. On the other (village) side the winery should take out some of the blue gum trees for better visability from the road but that’s just a personal opinion. And who am I?

Hopefully Springfontein Winery also changes the sign; by the looks of it it’s open for wine tasting day and night….. When I came in there was nobody to see ….

P.S. the second picture (HDR-toning) is dedicated to the best Chef of Durban. Besides good (spicy) food Andrew Harvard likes to photograph dishes, people eating and some hot spots in and around Durban. And you can all follow this on his blog! 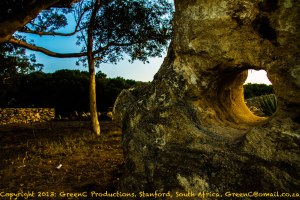