The first day of this month I had a stroll through both sides of the village with good friend and colleague Annalize Mouton. ‘Both sides’ I mention because 20 years after ‘Apartheid’ there are still barriers between the different cultures. Anyway Annalize published an extensive report on her blog ‘Portrait of a village‘.

The stroll was a challenge for both of us and not some kind of silly competition (as some people thought); the idea behind it was to photograph the same subjects with each individual view of things. Annalize is a traditional photographer (‘educated’ by her “Old School” husband Maré) while I like to see the more quirky side of life (hence the ‘twist’ -not always noted- in some of my more ‘traditional looking’ images). Usually I picture subjects with which I have some affinity. The challenge of this occasion was to picture also less interesting things. An example is the Anglican church at the Village Green. Annalize ‘complained’ that she was never able to picture it to her full satisfaction. Indeed; it’s not easy to photograph this (sloppy restored) historic building in the way every photographer would like it. I’m not satisfied either with the result but succeeded, as we were passing by, to ‘snap-shoot’ the filtered sun through the ‘bell-tower’.

Well; here my part of the 3 hour stroll:

Ancient Milkwood tree challenged me to add some vintage look

‘Solarplex’ of the Anglican Church

Annalize was fully rejuvenated after the stroll 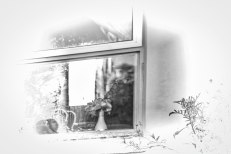 The little head behind a clean spot of a dirty window 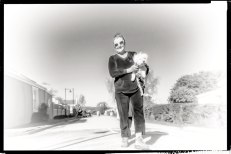 Dogs are good company. Some keep dogs for pleasure; others (see next picture) for guarding their property. sometimes even for both.

Early morning ceremony. You see it all over in shack settlements in South Africa. One of the fist things in the morning is brushing teeth. This is BTW Simba

Spaza shop in Hopland (the ultimate south of the village where the real Africans are living.

Overview of the village from the ‘Deep South’ where the shacks are.

‘Guest Relations’ in the non-original South African part of the village. (hey how did I describe that!)

Reeds along the willem Appel Dam.