“Nguni cattle descend from both Bos taurus and Bos indicus cattle and entered Africa around 8000 years ago. As the tribes migrated south into Africa they took their cattle along. Through natural selection and environmental interaction the cattle evolved into the hardy breed we know today as the Nguni. As the tribes settled in different areas, distinctive cattle ecotypes developed, but are essentially still Ngunis. Only in 1932 did the late Professor HH Curzon make an effort to breed true to type Nguni cattle which resulted in the formation of the Bartlow Combine breeding station in the late 1940’s. Another milestone in the recognition of the Nguni breed was the Bonsma report of 1950 on indigenous cattle in South Africa where the appreciation of this adapted breed was highlighted”. – from thecattlesite.com 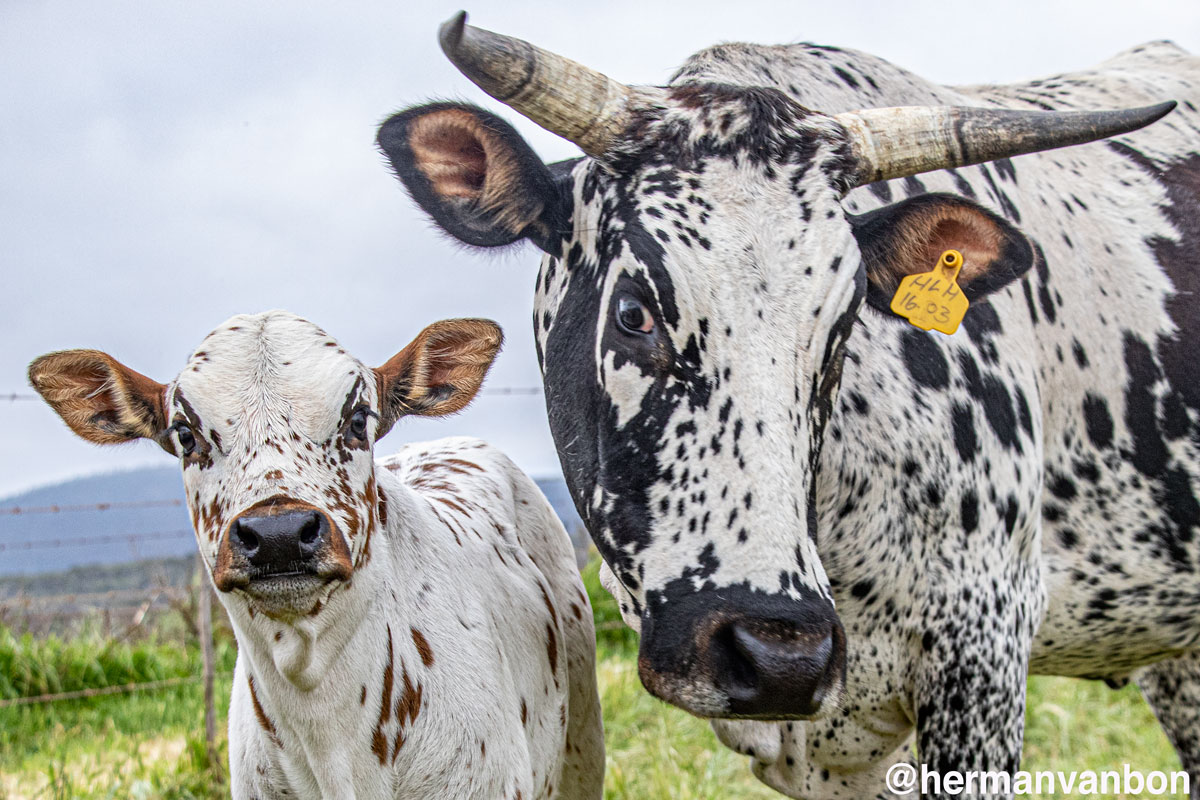 “The Nguni cattle breed is special to Southern Africa. A hybrid of different Indian and later European cattle breeds, they were introduced by Bantu-speaking tribes (Nguni people) to Southern Africa during their migration from the North of the continent. The cattle breed is medium-sized and adapted to grazing on the highveld. Nguni cattle are known for their fertility and resistance to diseases, being the favourite breed amongst the local Bantu-speaking people of Southern Africa (South Africa, Swaziland, Namibia, Zimbabwe, Botswana, and Angola). They are characterised by their multicoloured skin, which can present many different patterns, but their noses are always black-tipped. They are a principal form of Sanga cattle, which originated as hybrids of Zebu and humpless cattle in East Africa. DNA analyses have shown that they are a combination of Zebu (Bos indicus) and Bos taurus, the European and some other breeds of local cattle bred from Zebu. They are characterised by low cervicothoracic humps, in front of the front legs, instead of the high thoracic humps of pure Zebu. Besides the various colour patterns, these animals present a variety of horn shapes. All different combinations were catalogued in the beginning of the century by a South African herdmaster. This work inspired the Nguni Cattle Register, a compilation of terms to describe in full a Nguni cow or bull. The cattle are medium-sized, with bulls weighing between 500 and 600 kg, while cows weigh between 300 and 400 kg”. – Wikipedia

In the ‘outback’ of our village (Napier, Western Cape, South Africa) there is a small herd of 13 Ngunis, well taken care for. I was allowed by the owners to go amongst the animals and picture this characteristic breed. Thanks to the Hawkins family and their ‘cowboys’ Jonathan and Oswald who are very happy with their employers.

…. the Nguni cattle, the Zulu, the snail and the spirits that bee … 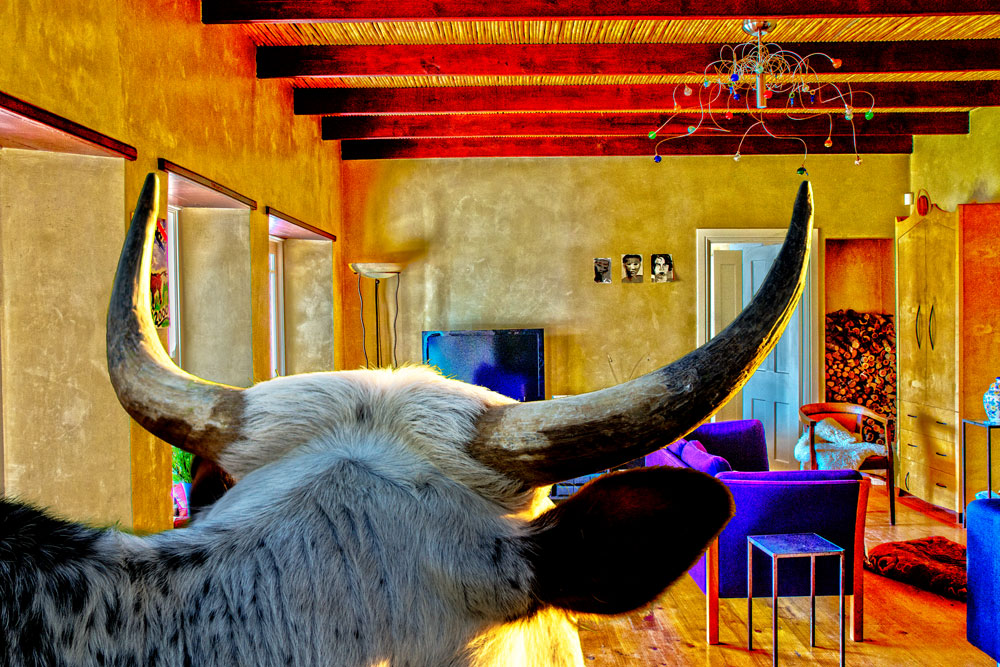 Sometimes (sometimes more often) I’m confronted with myself and not just by looking in the mirror. I’ve got my (nasty ?) habits and not everybody likes them. It’s healthy to be confronted with yourself; even if it does not always suit you at the time and place. Self-reflection is like body-building but that for the spirit…. When I was picturing Nguni cattle the other day I was just wondering how the difficult (very stubborn) ‘model’ Ina 099 would respond to a confrontation with herself … See also previous post.

Sometimes (sometimes more often) I’m confronted with myself and not just by looking in the mirror. I’ve got my (nasty ?) habits and not everybody likes them. It’s healthy to be confronted with yourself; even if it does not always suit you at the time and place. Self-reflection is like body-building but that for the spirit…. When I was picturing Nguni cattle the other day I was just wondering how the difficult (very stubborn) ‘model’ Ina 099 would respond to a confrontation with herself … See also previous post.

There is not much literature about the African Nguni cattle. But there is this book “The Abundant Herds – a celebration to the Nguni cattle of the Zulu people” that’s worthwhile to read and is well illustrated. Written and illustrated by Marguerite Poland, David Hammond and Leigh Voigt and partly based on the study of Bert Schroeder (RIP). ISBN 978-1-874950-70-7; published by Fernwood Press/Random House Struik. Why I’m mentioning all this? Well… I grew up in an agricultural environment dominated by Holsteiners (and its varieties), Simmenthalers, Angus etc. in Europe. These are the most common breeds of cattle around the globe. Africa has its own cattle and we all have to credit the Zulu people for magnificent name giving (based on the hide patterns) but first of all for their efforts to keep the Nguni pure. Nguni cattle play an important role in the Zulu, Xhosa and Sotho cultures in Southern Africa. In a typical Zulu village the kraal is always the center point. It provided the villagers not only with milk and meat; it also served as bridal dowry (“lobola”). The more lighter the hide the higher the status of the owner. Shaka Zulu bred white Nguni cattle and his elite guards were recognized by their white hides. There is so much to tell about this disease resistant type of cattle. You see them grazing in Northern parts of South Africa but the last years farmers in other parts of this country discover the (commercial) advantages of this breed. In our small village for example are already 4 herds of which we know and a fifth one on its way. As I’m asked to picture Nguni cattle for a hide trader I snapshooted, by means of photographic study, quickly some Ngunis on my way to another photographic subject early this. 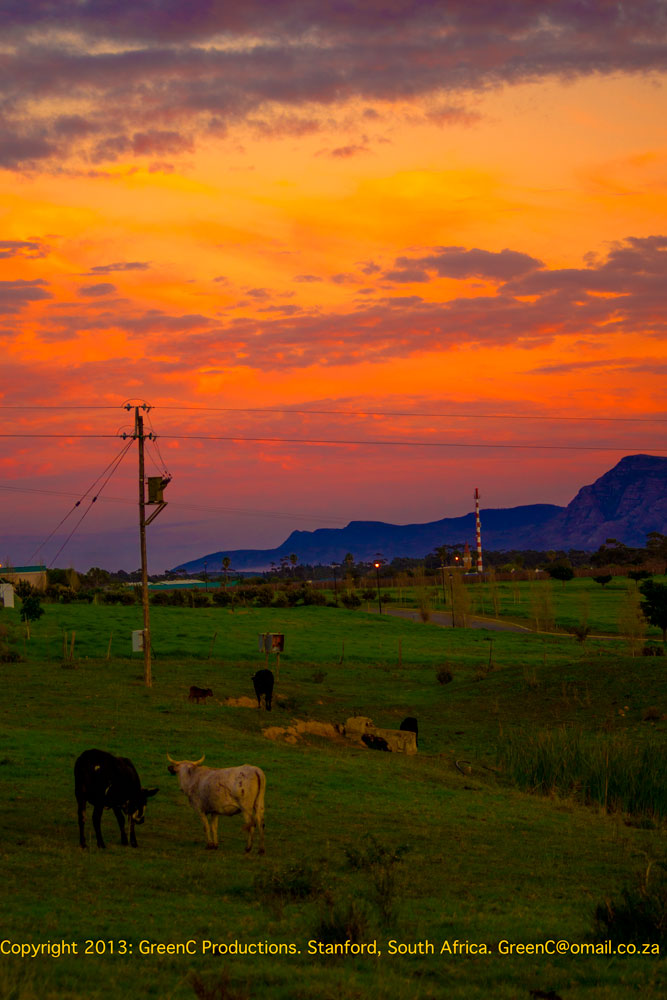 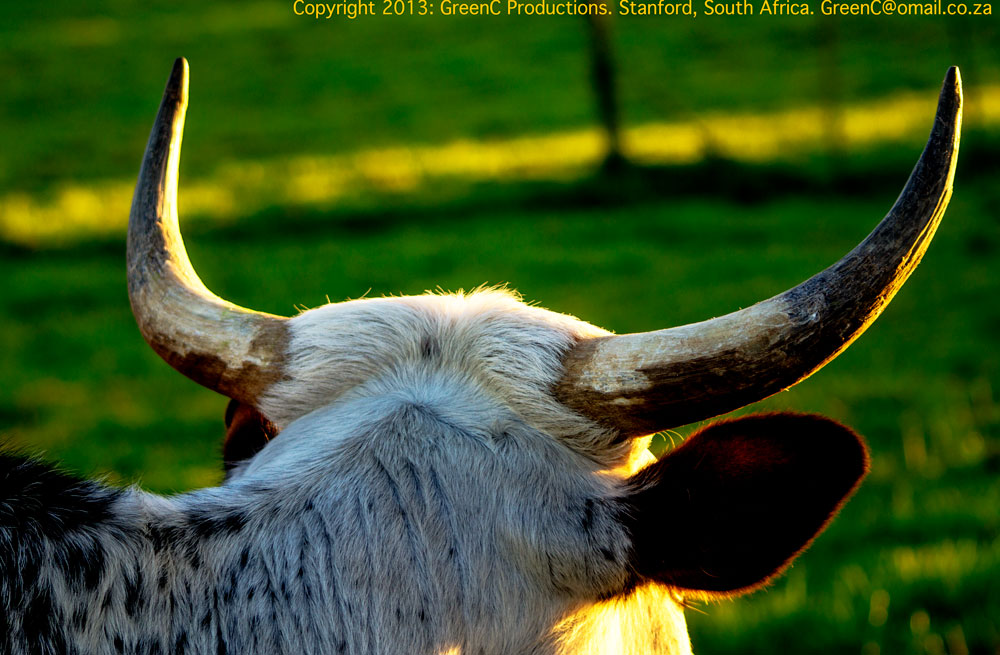